Inda was founded in 1944 in Caravate (VA) as a craft enterprise specialising in the production of brass bathroom accessories. In a few short years, the company grew to such an extent that, already in the 1950s, it became necessary to convert production from artisan to industrial. In the 1960s, a series of strategic acquisitions, including that of Ve.Ca (Vetreria di Cassano), allowed the expansion of production with glass accessories.

In 1965, Ceramica Dolomite was also established for the production of built-in ceramic washbasins (HERE the link to discover all its successful production). In the 1980s, the company expanded internationally, opening branches in France, Spain and Austria and, in the 1990s, in Germany. Continued growth in the ’90s led Inda to create a series of products for large-scale distribution.

In 2000, all administrative services were centralised with the introduction of electronic systems and unified procedures. Within Inda’s production units, most of the production phases are carried out following numerous industrial investments. In 2013, Samo Industies was founded, joining Inda and Samo to create an integrated group that is a European leader in the bathroom furnishing sector, able to offer a varied set of products ranging from accessories to bathroom furniture to shower solutions. Inda currently maintains its two production plants, which are flanked by three subsidiaries and no less than 60 distributors worldwide. 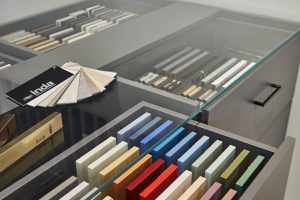 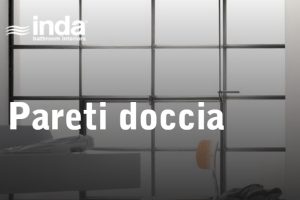 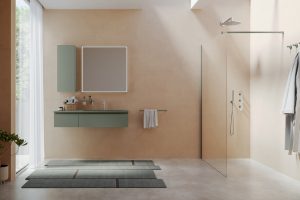 INDA presenta YOUR OWN COLOR!